California is Invested in Action on Ocean Acidification

In 2018, the State of California Ocean Acidification Action Plan (Action Plan) was adopted by the Ocean Protection Council at their October 25 public meeting. Continuing California’s bold leadership on climate change, articulates a 10-year vision for addressing ocean acidification and a series of pragmatic actions to work towards that vision. It is designed for integration into public agency operations and to inform decisions made by members of the private sector and scientific community. In so doing, it may serve as a model for other jurisdictions seeking to undertake concrete actions to better understand, mitigate, and adapt to ocean acidification.

The Action Plan was produced by the California Ocean Protection Council in cooperation with the California Ocean Science Trust. This policy and management plan is one of the first of its kind, and was developed within the framework of the International Alliance to Combat Ocean Acidification (OA Alliance), a global partnership founded in 2016 to assist governments in taking meaningful action to anticipate, mitigate, and adapt to the significant changes to the chemistry of the world’s oceans that are now occurring as a result of carbon dioxide (CO2) emissions.

Informed by the Task Force

The California Ocean Acidification and Hypoxia Science Task Force provided scientific and technical input and reviewed the draft plan for scientific feasibility. The Task Force also developed a science strategy (Appendix 5) that summarizes the research that will be necessary to support full implementation of the Action Plan within the next five years.

For more information about the Action Plan, visit http://www.opc.ca.gov/oa-action-plan/ 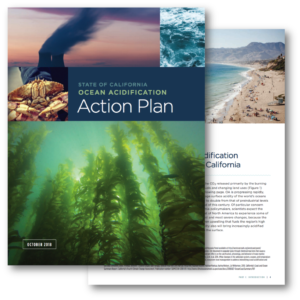